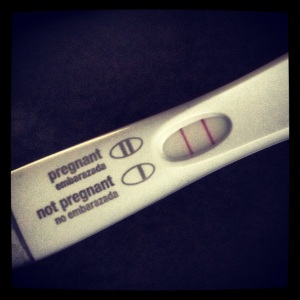 Six months ago, Ted and I went to see the fertility specialist. After three miscarriages in seven months, our hearts were shattered. In some ways it was a relief when the doctor did some tests and found out that both of my Fallopian tubes were blocked. Because of that and several other reasons, he recommended IVF as our only option for biological children, stating that there was no way we could conceive on our own due to complications from the other pregnancies. Since Ted and I have always had a deep desire to adopt, we decided to forego the $14k price tag of IVF (and all the other risks associated with it) and start pursuing adoption. It was a relief in many ways for me to close the door to such deep loss, knowing that we would never return there.

Well, a few weeks ago, I feared the worst… what if these symptoms I’d been having weren’t a side effect of medicine after all… what if I was somehow pregnant. I was gripped immediately by fear. Why would God work a miracle to get me pregnant only to have me miscarry again? No, not that road again. It hurt so deeply as pieces of my heart were taken away and I didn’t ever long to go back. So, I ignored the signs, hoping this wasn’t the case. But God had other plans. After about a week of me silently questioning, I decided to tell Ted. He encouraged me to go ahead and buy a pregnancy test and see what happens. Immediately it came back with two pink lines – two really dark lines. We were clearly pregnant. What the doctor said would never happen just did. My heart was full of as much excitement as fear. The thought of a child with my sweet husband’s eyes was a dream that might actually become a reality. And everything seemed different this time around.

I went last Friday to the doctor for a blood test to confirm the levels of this pregnancy. Because my levels were always so low in past pregnancies, we were afraid to hear the results. But what joy we experienced when the lab work came back 3x higher than it had ever been with my previous pregnancies. The nausea, exhaustion and other pregnancy symptoms keep coming in waves. I couldn’t have been more excited… or more apprehensive. Monday, I went back for the second round of tests. The goal is to see the HCG (pregnancy hormone) double ever 48 hours or so. This was the point in our other pregnancies where it started going downhill. But this time, the numbers tripled. We were filled with hope, seeing that this time was indeed different.

And then this past Wednesday, just a glimpse of my fear was realized. Red blood. Never something you want to see during a pregnancy… especially with my history of repeated miscarriages. We rushed to the doctor, only to find that all appeared normal. It was too early to see much detail on the ultrasound, but overall, the doctor was not concerned. It seemed the bleeding was a side effect of a medicine I’m on to help sustain the pregnancy. All in all, once again we were hopeful. The doctor did a third blood test just to ensure that all these pregnancy symptoms were still pointing to a positive outcome.

And then this morning I got the call. Instead of doubling, my numbers dropped by a third. Another Riley baby meets Jesus before we do. And we are left with the pieces to put back together. Again, my heart is shattered. I don’t know even what to say or how to process this… me, the infertile barren woman conceived again. God worked a miracle. And then just as swiftly took it away.

This baby gave us such hope… a renewed faith and trust in God’s goodness that I haven’t had in months… a trust that God does indeed care about the desires of our hearts and longs to give His children good gifts. I was freshly aware of my need for God’s mercy. His hand holds each day of my baby’s life just as He holds mine. How desperate I became again for His mercy and provision. How aware I was that He is over all. All I could do is beg for mercy.

I’m not sure where mercy is found in death. That is one that I just don’t understand. But God chose, yet again to take my dear child before my hands even had a chance to hold them. I’m so angry. I’m so confused. Where is the goodness? I’m not even sure I want to trust Him right now. This baby brought us hope and then our hope was taken away so quickly. So now, I’m stuck in darkness realizing where else can I go? My Jesus, my Savior and my faithful Friend is the one with the words of eternal life. But right now I don’t want to run to Him. I want to cry out in anger because He could have stopped this and He didn’t. He’s the only one I have to turn to yet turning to Him hurts so deeply. But i do know He is true. I do know He is faithful and will work even this horrible loss to bring good in me. I just don’t see how. And this surely doesn’t feel or seem good in anyone’s eyes. I just ache. My heart is broken and my soul feels raw. I cry to him, knowing full well He allowed this and am just left confused because those two pieces make no sense to me. So for now, yet again, I’m asking Him to just hold me until I find hope again.